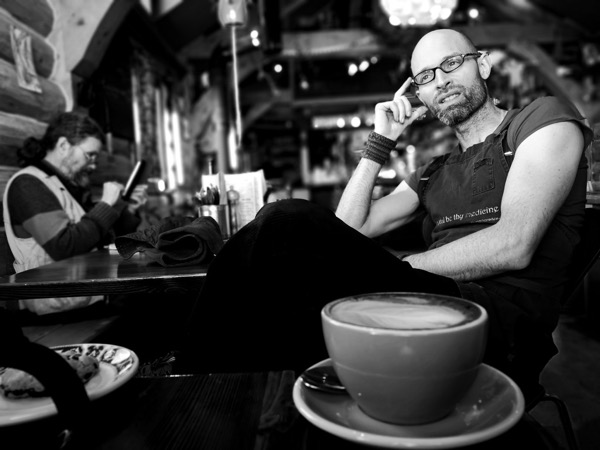 Florian Boulais has been living in the Yukon for more than 20 years. Son of a French father and a German mother, he spent his youth between France, Germany and Switzerland.

He grew up on a small farm, and very early on, showed an unquenchable thirst for understanding how things work: from bicycles to mopeds, then motorbikes and cars. He went on to study mechanical assembly, electricity, electronics, laser technologies, holograms, and computers. He is a licensed jet engine mechanic and a certified Apple technician. Until today, Florian spends at least 10 hours a week learning and honing his skills.

In school, Florian had a hard time. His school results went from bad to average with a lot of effort. He felt ashamed about his bad results. It is only later that he understood his natural tendency to look, not only at the elements of a system, but as well at the relationships between elements of the system – something that our current school system does not consider or reward but that turns out to be a precious ability. This explained why he was so far ahead from the rest of the class when working with 3 dimentional visioning, mechanical assembly and engineering. He found that his mind would not let him move on until he understood all aspect of something and how it fits within the bigger picture – less speed, more depth. He is now able to define this tendency with words: sytems thinking.

After spending time in the French navy and working on commercial jet planes, Florian moved to the Yukon. He found the landscape and the people to be an endless source of inspiration and energy. From then on, he has been working towards not only improving the quality of his life in the Yukon but as well, sharing his passion for resiliency and how things work as widely as possible.

When first landing in Canada, Florian spent one year learning from Ojibwa first nation people on the land. This time was life changing. From this moment on, Florian shifted his focus from “Complicated Mechanical System” to “Complex Dynamic Systems” – the world of what is alive in other words. During this time he came to major shifts in worldview namely:

Florian built and ran a successful business that he built with his own hands while networking with other businesses across the whole Yukon. In parallel to this, Florian has been studying resiliency across domains such as psychology, physiology, economy, politics, business, education and more.

Aside from the consulting business, Florian currently runs another business, is an EMS volunteer as well as a firefighter and he is involved with non profits.

Florian plays one of his 3 instruments daily, speaks 3 languages, works out daily, ice dips weekly, meditates for one hour daily and creates visual arts (such as this website 🙂  )